Just few yards from my house there’s Canada Water. It consists on a lake or a dock, with ducks and vegetation, a new and impressive library that it’s like the one in Copenhagen called the Black Diamond, a bus and tube redesigned station which is a cylinder of glass and metal and covered bus stops. There are beautiful housing around and they’re working on the construction of other two luxury developements. Well, they probably never will get the sights of the decadent flats of the two high tower blocks next the station, that can be seen from London Bridge. There’s also a Decathlon, a leisure park (cinema, bingo, fastfood, free parkings) and the house of quality newspapers called Metro.

kind of artist, illustrator and graphic designer View all posts by merchesico 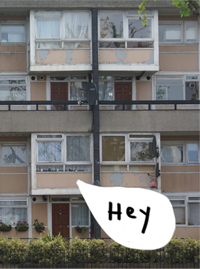 ME AND MY CV ON LINKEDIN

JUST OPENED A SHOP ON ETSY!